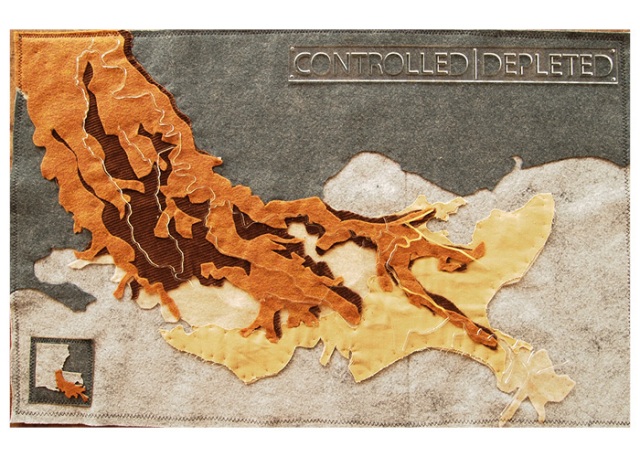 As the first line of defense, the strategy for the coastal edge includes the adaptation of coastal ecosystems to a more saline, warmer environment by the planting of mangroves. To provide New Orleans with long-term protection from storms and sea-level rise, the city edge is reimagined as the second line of defense. It is assumed that by 2050, most buildings will be clustered in areas of the city that have an elevation above sea level and those that remain in low-lying areas will be adapted to periodic floods. A super-levee structure on the side of New Orleans adjacent to Lake Pontchartrain will protect the city from most catastrophic storm events. Storm water will be collected in hydric parks and channels and pumped in both the direction of the lake as well as to the river channel. 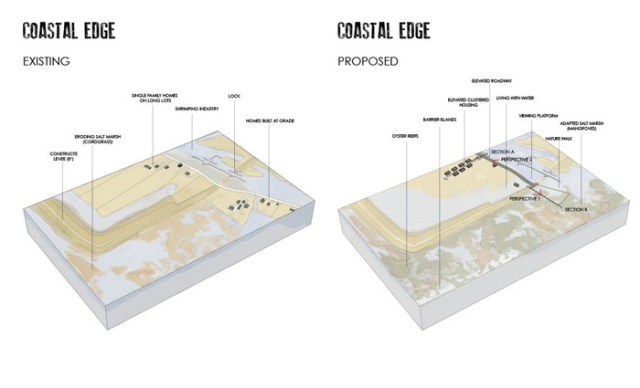 Small coastal communities will be able to continue historic inhabitation patterns by adapting housing typologies to a watery, dynamic environment. These fishing communities will be clustered behind the protection of barrier islands and natural levees and boating will be the primary mode of transportation in these areas. The mangroves will provide a new habitat to many species of fish and birds, which will aid in sustaining small commercial fishing operations in the area.

Currently, the port facilities are inaccessible to the public and located on top of a box levee that sits on pilings over the water’s edge. The proposal suggests that over time the box levee will be dismantled, leaving some pilings as a substrate for oysters and other aquatic organisms. The natural levee that remains is converted into a faceted surface that channels fresh storm water from the city and creates a gradient of pools to the water’s edge. This edge will serve both as a working edge – the pools providing opportunities for aquaculture, a cleansing edge – the water leaving the city will be filtered before entering the former river channel, and a public space for the communities concentrated on the high ground of the natural levee.