This project transforms mono-functional infrastructure into multi-functional systems, addressing storm water issues and creating an identity for the largely uninhabited corridor that bisects Baltimore, Maryland. The unique space proposed is comprised of a series of wetland parks, formed through revealing and adapting the layered history of the Jones Falls River and expressway. Once buried and problematic infrastructure is re-interpreted as regenerative space that supports ecological and cultural functions, engaging both sides of the city.

The Jones Falls River was a primary resource for the city of Baltimore. As the city encroached on the territory of the river, filling in wetlands and destroying the estuary, floods threatened the downtown business district. After significant floods took many lives and destroyed valuable property, the river was channelized and eventually buried in a culvert. Presently The Jones Falls Expressway runs over and parallel to the underground river forming a physical and psychological barrier between East and West Baltimore. The city is considering various scenarios for removing all or part of the expressway south of Penn Station. The decommissioning of the JFX opens up new possibilities for this under utilized corridor.

The Baltimore harbor suffers from very poor water quality; this is an ecological, cultural, and economic concern. The lower Jones falls watershed encompasses 58 square miles, composed primarily of highly impervious urban land. Currently the pollutants and trash that enter the stormwater in this region converge within the culvert and are released into the heart of Baltimore’s primary tourist attraction, the inner harbor. The ecology of the larger Chesapeake Bay is threatened by contaminates from the matrix of tributaries, such as Jones Falls that feed its waters. In this project the urban fabric of Baltimore is considered as part of this larger estuary system.

Reveal layers of existing infrastructure. Daylight the culvert under Fallsway Road, and divert the Jones falls river base flow. Expose the geomorphology of the corridor by uncovering the bedrock layer at grade with the base of the culvert.

Generate public space where diverse flows intersect and overlap. The flood line can be understood as a generative edge, delineating a site for desirable and adaptable public space. 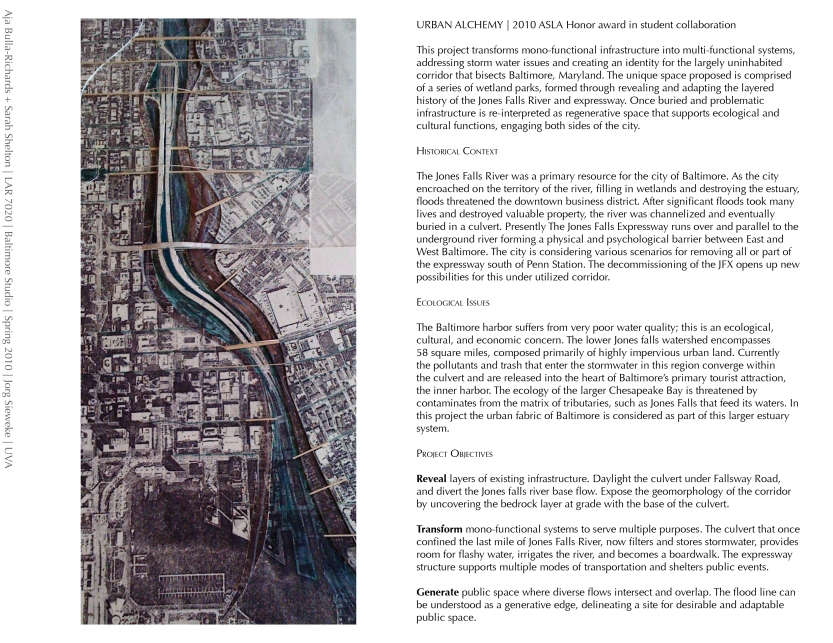 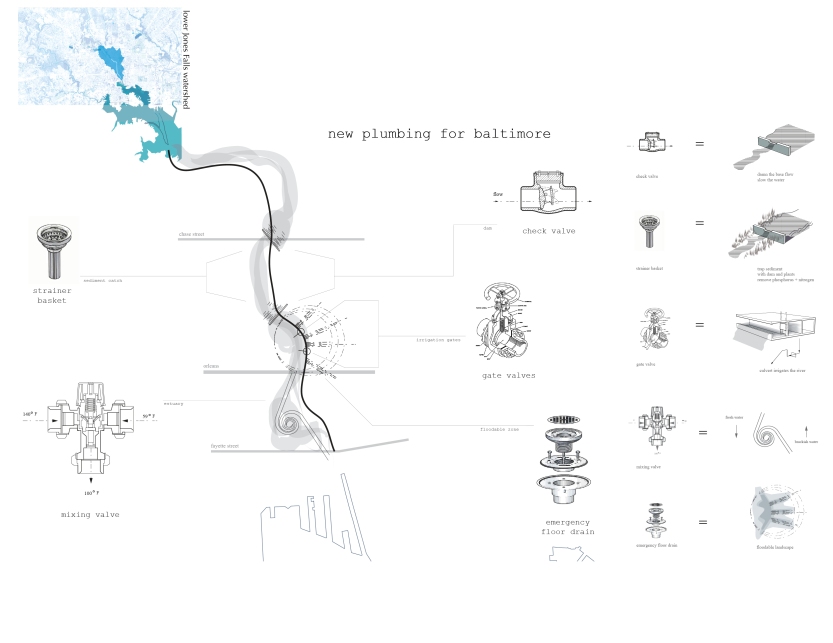 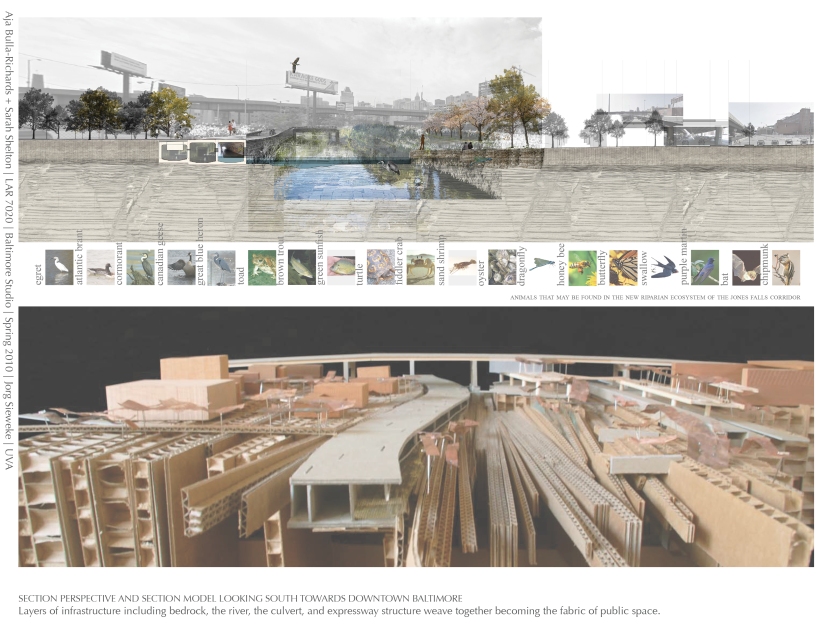 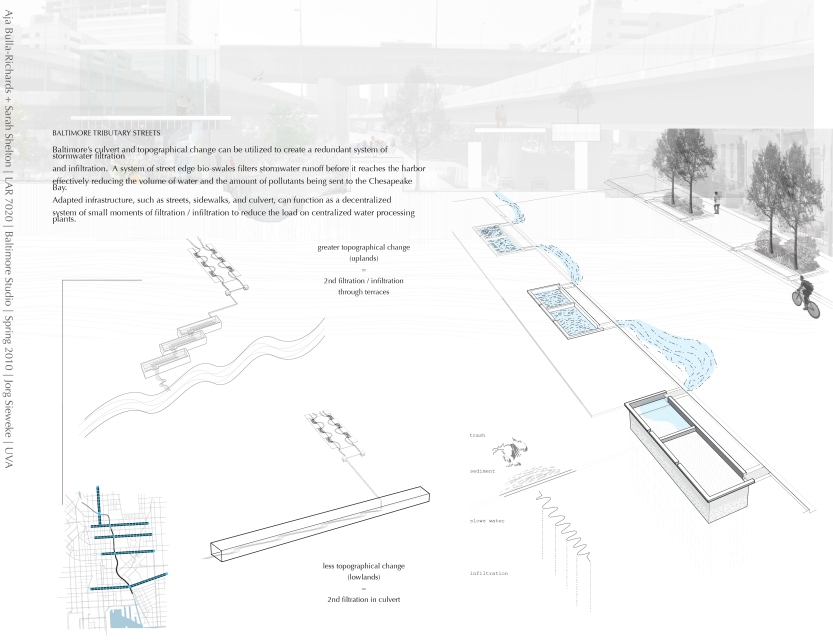 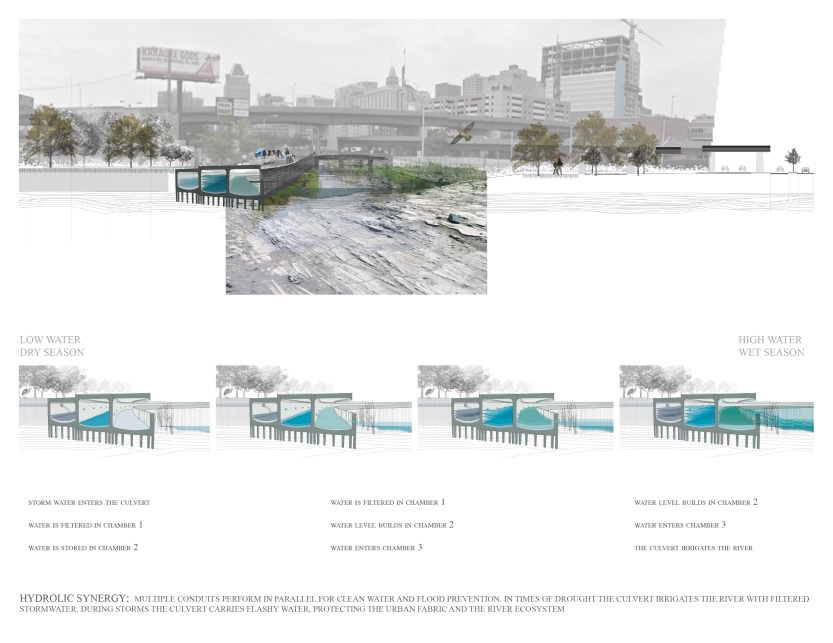