New Classifications for the Urban Metabolism

The past decade has seen widespread development of forms of urban analysis and design based on various material, environmental, economic and social flows. While this approach has supplanted our discussion of the city as fixed, our classification system has lagged behind in its transformation. In suggesting the term urban metabolism, we seek new classifications of environmental flows to assist us to think, to harvest, and to relate. In these environmental flows, soil and earth, green and energy, building services and architecture are not divided; they form complex entities. This symposium asks participants to gather thoughts on a range of entities under the general notion of “objects” – temporarily distanced from moral and aesthetic judgments pronounced on them and modifications made to them in response to these judgments – to reconstitute a place of humanity in them. As both creators and the recipients of these hugely complex systems, human beings face the problem of how to classify themselves beyond humanism; in seeking equality in representations in the parliament of things, we must first revise our categories of knowledge to embrace what may be described as a nature/culture/infrastructure amalgam. In order to frame the discussion, we are using three “objects” to delineate a different landscape within which this symposium takes place.

QuasiObject: What complex entities and hybrid networks have either recently emerged or have existed but were neglected or denied under modernity? How can we pivot environmental artifacts such as the manicured lawn and the conditioned air between the human and the nonhuman, between subject and object? By making central the processes of configurations of each other, can we begin to reimagine our understanding of human/nature by bringing to the fore the marginalized and the neglected?
WorldObjects: If we focus on a new set of previously marginalized entities, what status are they to be given? Can we, for example, expand our concept of legal subjects to non-humans, as if in a historical progression of acknowledging other legal subjects from white males to women, children and people of color? What are the potential non-human legal subjects we might acknowledge in this new framework? Fish in the world’s oceans? Seedbanks? Fertile soils or farmland?
HyperObjects: How do we situate or theorize a set of material entities that while made by us, elude or defy established human temporal and spatial scales? What new modes of operating or realms of practice do such things as nuclear waste surfacing in Louisiana salt-domes, sinkholes, the ever growing plastic trash vortex in the Pacific Ocean, or Greenland’s melting icecaps bear upon our understanding of and approaches to the urban metabolism.

Every three years the “Woltz Symposium” generates the opportunity to promote discourse between students and faculty of the University of Virginia’s School of Architecture with genuine leaders on emerging topics where Landscape Architecture and Architecture overlap with sciences, the humanities and art.

The Woltz Symposium 2013 is curated by Nana Last, Shiqiao Li and Jorg Sieweke 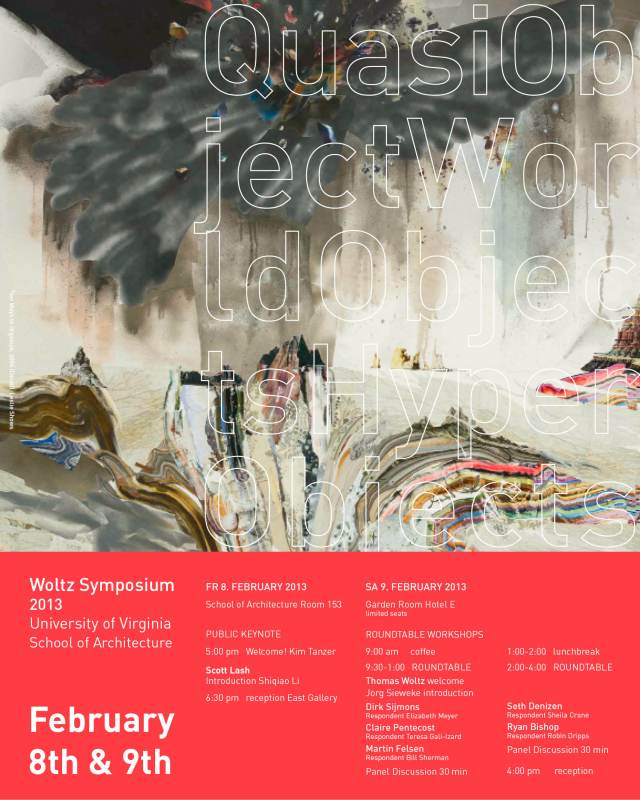